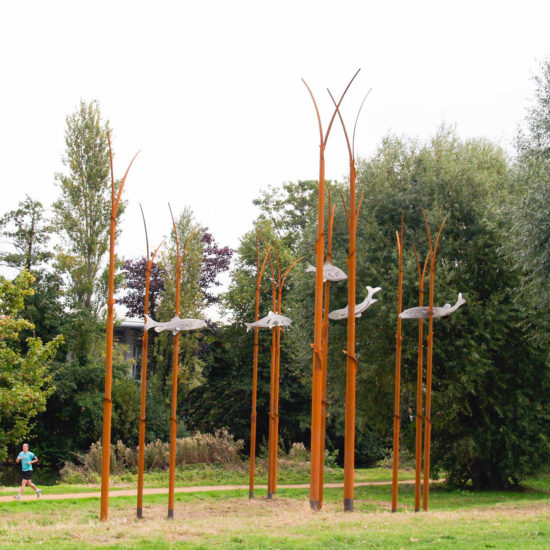 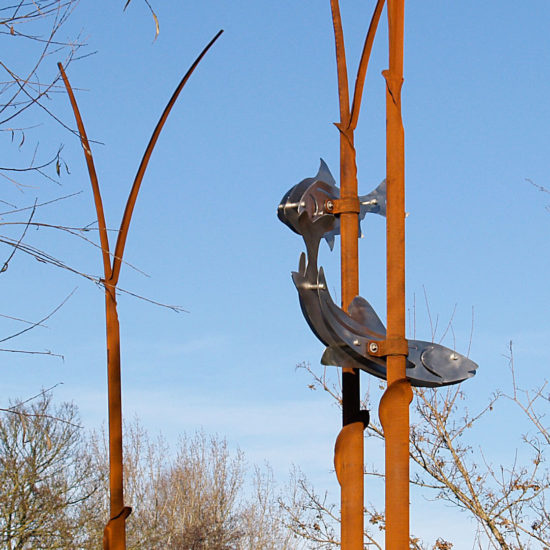 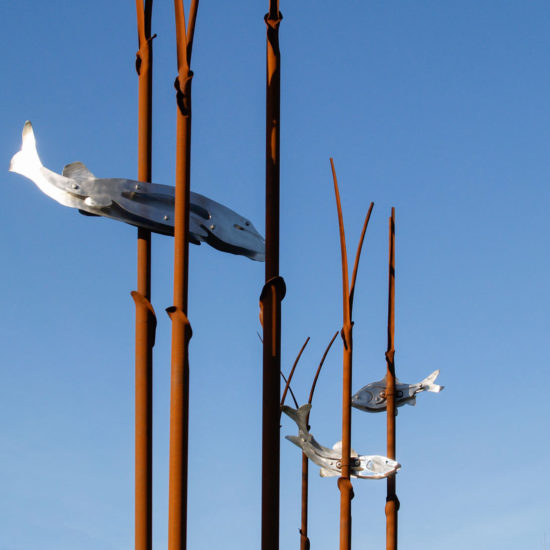 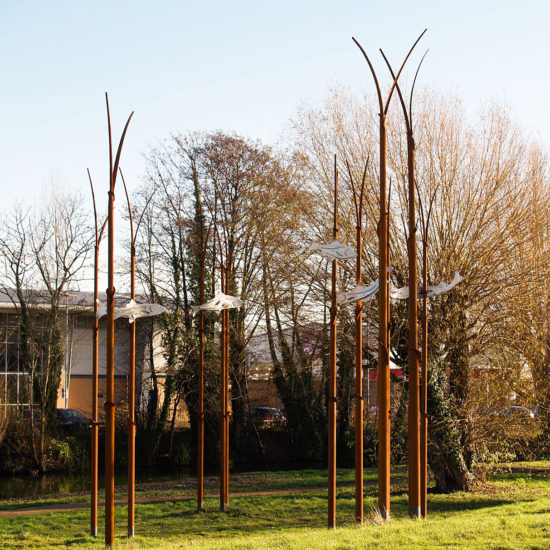 Charles won a commission from Guildford Borough Council to design, make and install a large sculpture sited on the banks of the River Wey at Woodbridge Meadows, Guildford. This is the largest public artwork of its kind in the city.Lead Councillor for Economic Development, Tourism and Heritage, Cllr Geoff Davis said:
‘Our aim is to have an exciting and original landmark piece of public art for everyone to enjoy. The artwork will compliment exciting environmental improvements and will have the potential to become a new local landmark for our town’. He added ‘We have appointed an experienced artist for this project with a track record of producing outstanding work. The successful design and proposal reflect the aim of our public art strategy, which is to encourage creative and innovative work in the future while conserving, celebrating and promoting Guildford’s rich cultural heritage’

Two very successful art workshops to study and design abstracted fresh water fish images were held by the Wheely Down Forge team as a requisite part of the commission.

In the first, members of the public produced some excellent works on collage backgrounds. During the second, 8 and 9 year old children from Northmeade Junior School created some fabulous fish drawings on a five metre long freize.

The freize was inspired by wall panels in the mustaba of Kagemni in Saqquara which depicts everyday life on and in the Nile in ancient Egypt. It will remain at the school to be completed as part of the curriculum.

Installed in September 2016, the sculpture entitled Silver Shoon is a swathe of eight metre tall forged Cor-Ten steel reeds with stainless steel abstracted fish swimming amongst them. The concept was inspired by the poem Silver by Walter de la Mare:

Silver
Slowly, silently, now the moon
Walks the night in her silver shoon;
This way, and that, she peers, and sees
Silver fruit upon silver trees;
One by one the casements catch
Her beams beneath the silvery thatch;
Couched in his kennel, like a log,
With paws of silver sleeps the dog;
From their shadowy cote the white breasts peep
Of doves in silver feathered sleep
A harvest mouse goes scampering by,
With silver claws, and silver eye;
And moveless fish in the water gleam,
By silver reeds in a silver stream.

Walk around between the reeds as if on a river bed and look up at the fish swimming high above you. The movement of tall summer grasses and winter flooding will add a further visual interest.